Unknown. In the show it is a primate, in the film it is a reptile.

In the original series, the Gremlin was an ape-like creature with curly green fuzziest thick fur and ugly larges lips. It had scary eyes with monstrous black outline and had a gorilla-like nose.

In Twilight Zone: The Movie, the Gremlin is more of a menacing-looking creature. It had black hair and light-greenish eyes with a mouth full of sharp teeth. It had seemingly short arms compared to it's legs and sharp black claws. It had a large head like that of a typical alien and had a muscular chest. It had double-jointed legs with black claws and a tail like that of the character Pumpkinhead from the Pumpkinhead franchise.

The Gremlin later returns in the fourth segment of Twilight Zone: The Movie. However, the creature is much different compared to it's original appearance in the original series. The character who sees the Gremlin is renamed John Valentine who sees a glimpse of the Gremlin from his plane window. Seconds later, the Gremlin comes into better view and is seen on the wing's engine and is struck by lightning which seemed to have no effect on the creature.

After trying to alert the others, John decides to try to go to sleep. However, he opens his window shade to find the Gremlin peering into the window and violently growing at John who starts to scream. John later keeps seeing the Gremlin on the plane's wing and the creature finally starts to sabotage the plane by taking pieces of the engine and throwing then into it. When the plane starts tipping side to side, John takes a gun from an airport security officer and opens his window in an a temp to shoot the Gremlin. John fires two bullets from the gun, missing with both, until the Gremlin leaps towards John and bites his gun in half. When the lights of the landing zone appear, the Gremlin puts its hand on John's face, about to kill him, but changes its mind and then removes it, grins at him, and waves its finger in a "tut, tut, tut" manor, annoyed with him for spoiling its fun. The gremlin leaps off of the plane and is last seen flying through the sky like a deflated balloon. 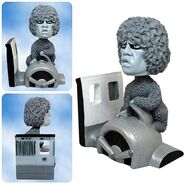 A bobble head of the Gremlin.

The Gremlin staring at Bob Wilson.

The Gremlin as it appears in Twilight Zone: The Movie.

The Gremlin struck by lightning.

The Gremlin growling at Valentine.

The damage that the Gremlin left behind on the plane.

An Easter egg of the Gremlin in the 2019 episode Nightmare at 30,000 Feet
Add a photo to this gallery

Add a photo to this gallery
Retrieved from "https://twilightzone.fandom.com/wiki/Gremlin?oldid=17286"
Community content is available under CC-BY-SA unless otherwise noted.